A large safety guard that was installed by Ferndale Safety around a vertical turret lathe (VTL), caused an important machine handwheel to become inaccessible. Ferndale Safety’s team of mechanical and electrical engineers replaced the handwheel with a remote control that could turn make fine to coarse adjustments.

What is a vertical lathe? 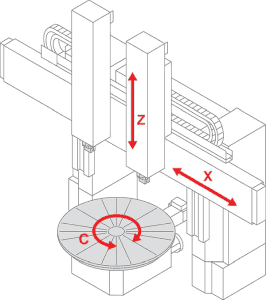 Ferndale Safety chose to use as many off-the-shelf components like this control pendant to reduce final costs. The remote control includes an enabling button to prevent accidental movement, and a speed adjustment to allow for very fine or coarse adjustments. The electrical version of the manual handwheel used a motor and timing belt system to allow for precise movements. This was controlled with a remote control pendant.